Born into a family of 5 children, 4 girls and 1 boy, Sithabile the second last daughter of Cameron Mlotshwa, raised in a farm in Rangemore grew up fighting to be different from her early childhood. This strong desire and drive to be different would shape who Sithabile would be and

the unknown future that lay ahead of her.

Her greatest love and inspiration, her grandmother; the late Sifikalomuthi B. Nkomo, a woman who Sithabile admired and aspired to be like, gave power to the dreamer and fighter Sithabile was in her teenage years. It was also her grandmother who insisted that Sithabile had to attend Art school telling her father that this is where she belonged.

Growing up in her grandmother’s house, among relatives who were constantly arguing about who was more royal and why they were more royal than the cold side of the family, opened a new world for Sithabile that would greatly influence her way of being for years to come. Words of wisdom that stuck to memory from her beloved grandmother were that “you are what you think”. “If you think you are poor, you are”.

Her grandmother constantly warned Sithabile about the danger of negative thoughts and the importance of guarding ones mind. She also taught Sithabile about the power of words and the impact, thinking and uttering them had. Her grandmother drilled Sithabile about Ubuntu, the essence of being human and constantly reminded her of the importance of believing in one’s aspirations and never letting go of her dreams. For her grandmother, who herself was a strong woman, who never settled for nonsense, spoke often about how she left her husband, Sithabile’s grandfather, taking with her, her 9 sons and one daughter. She also spoke often about how challenging it was in those days to stand alone as a woman and raise 9 sons and a daughter.

Her stubborn nature made it possible to successfully raise these 10 children as well as being the first black woman born in 1900 to own her own house. Her beloved grandmother, a hardworking, successful business woman, passionate about farming, music, and a great sense of fashion, kept all her money on her waist, due to not trusting banks. Sharp and fearless even at her old age, she instilled great courage in Sithabile and helped Sithabile discover at an early age the power of her mind, ideas as well as the beauty and valu

e of being a woman.

Sithabile, now a mother of 4 daughters living in the Netherlands, was told by her family then that she was too different, that she did not belong in the environment she was growing up in and that they knew early on that she would travel the world, a fact that became Sithabile’s reality and way of life.

Sithabile’s work deals with issues of belonging, narration and collective memory. “I’m interested in investigating complexities associated with place, historical consciousness and representation in cross-cultural interaction. My current work is focused on the institution and decay of society.

I am particularly investigating “Traditions that matter” with the focus on how societies remember and the role of narratives in institutional erosion. When I lived in Zimbabwe, my work then focused on belonging, human rights, women and their place in society. Migrating to the Netherlands brought about many challenges that created a huge shift in my work and subject.

This resulted in me becoming the subject of investigation aggravated by a search for belonging that came as a result of loss of place. This shift led to my last project entitled Footsteps of Change – a series of paintings and installation that chronicles oral history, national identity, and collective trauma. The paintings and installation are a total of 100 pieces that represent the birth of a nation. The thread that runs through all my work has to do with ownership in the sense of caring for and taking mutual responsibility. This refers to the present, our history and future, in place and culture.

Mlotshwa is a cultural producer, creator, art collector and passionate campaigner for women’s rights who sees art as a catalyst for change, innovation and human advancement. S’thabile is the Founder and Executive director of Thamgidi Foundation,

Sithabile was invited to speak at Tedx Women Amsterdam and publicized in The Next Women (an Online Magazine For Female Business Heroes) as an inspirational woman. She is also publicized in the Rebelle Art & Feminism 1969 -2009 catalogue of the Museum of Modern Art in Arnhem, which offers a retrospective, and a look at the Dutch women’s art movement, and pays particular attention, among other things to the role of Women in the Visual Arts Foundation, and the role of women artists in artists’ initiatives.

With this, Thamgidi Foundation, IFAA and IFAA Global are now facilitating the building of 10 new residency programs in the African continent, a Research centre and Art Academy in Togo, the building of Karwansaraj Culture Centre in Afghanistan, the building of 2 schools in Congo DRC for the purpose of creating conscious societies, poverty reduction and empowering women. 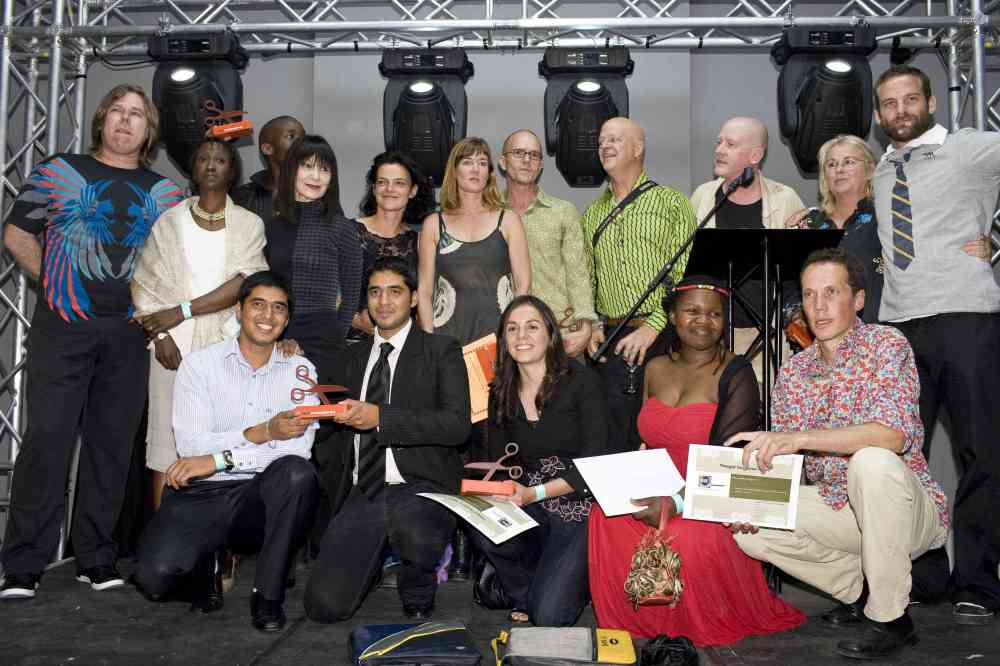 Through her initiatives, IFAA and IFAA Global, Sithabile will realize 3 new biennales in the African continent in 2016 – 2017, including 6 new IFAA Platforms. Her major current project is to build from 2015 – 2025, 60 IFAA Art Platforms across the globe in order to answer the urgent Global society’s challenges. Sithabile is former chair of “VAAB” the visual arts association in Bulawayo Zimbabwe, former artistic director of Festival De Oase, (a Diversity Performing Arts Festival which brought more than a 100.000 visitors in a week).

She is the former Secretary General of ResArtis, former Board of directors Stichting WHAA, 2009 advisory Board member of the Gelders Balkon (Museum of Modern Art in Arnhem) 2008 President of the Jury at the Dakart Biennale and Member of the Alliance of Artists Communities. She has illustrated books and participated in numerous exhibitions and in the restoration of the Cyrene Mission (restoration of a church which is on UNESCO world heritage list). Her foundation was 2006 – 2010 partner of the Dakart Biennale, (for the Thamgidi Prize), 2006 – 2009 partner with ResArtis for the ResArtis award given at the Dakart Biennale in 2006 and in 2009 at the Biennale of Skopje in Marcedonia. 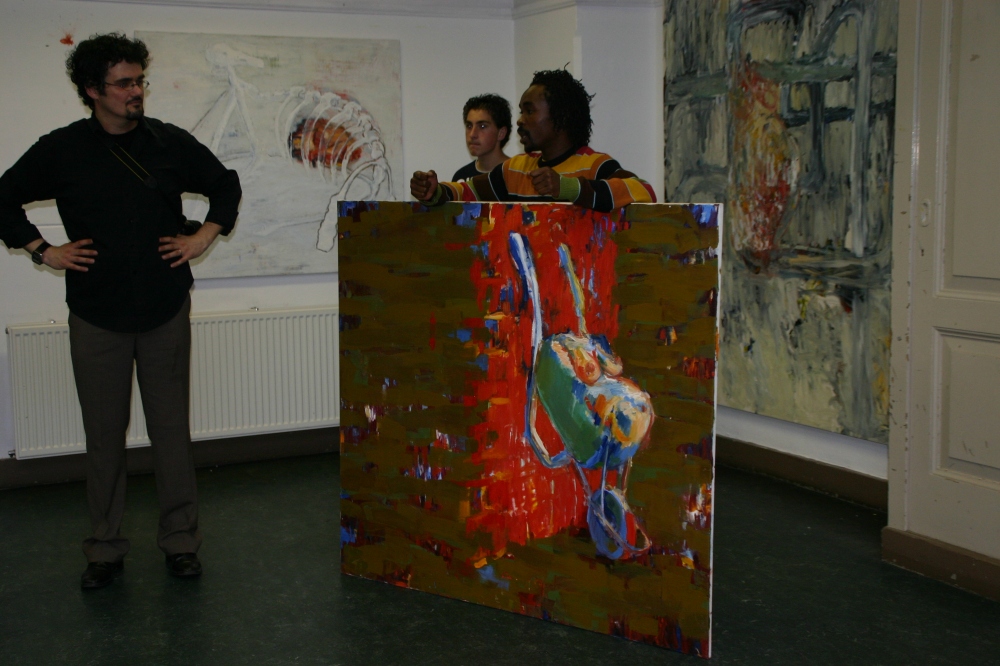 The 2010 Thamgidi Foundation Grant was given for the Spier Contemporary Prize (a major contemporary exhibition in Cape Town – South Africa by Africa Centre. Since 2010 – date Thamgidi Foundation works in partnership with Africa Centre in the AIR partnership (Artist in residency program partnership that connects Africa’s artists to residencies around the world. Thamgidi Foundation whose core is Ubuntu – includes a Fund, Artists in residency, artist Achieve, IFAA and all it’s branches, a library, Arts & Young people, Green is Cool, iDesign and IFAA Design Platform and a Major Contemporary Art Collection. For Thamgidi, these activities strengthen cross-cultural exchange, the development of intellectual activity and knowledge transmission.

The Thamgidi collection includes works of internationally renowned artists, among them: Marcos Lora Read, Meschac Gaba, Pelagie Gbaguidi, Rashid Jogee, Moridja Kitenge Banza, Gonçalo Mabunda, Misheck Masamvu, Renzo Martens, Bill Kouelany, Kiripi Katembo Siku, Voti Thebe, Guy Wouete, Victor Ekpuk, Johann van der Schijff, Keiko Sato, Mario Macilau, Samuel Olou, Michael Tsegaye, Remy Jungerman and Angela de Jesus just to mention a few. In 2005 S’thabile was commissioned by the Kelvingrove museums and galleries to make an installation that is now displayed at the Gallery of world cultures alongside old masters – Picasso and Rembrandt. With Glasgow Museums and Galleries as proud collectors of the only contemporary leaded brass sculpture from Benin in a UK museum, and the only UK work by the Zimbabwean artist S’thabile Mlotshwa, it is with this that she was invited to be at the presence of her Majesty the Queen of England for the official re-opening of Kelvingrove Museums and galleries, the second largest museum outside London. S’thabile has exhibited in many international exhibitions, won several awards and has works in the permanent collection of the National gallery of Zimbabwe in Bulawayo with most of her works collected worldwide.

Her foundation gives grants and prizes for: Travel Artists in residency, Documentation, Research and supportive grants. Beneficiaries of supportive grants have included among others: Cultureel Platform Lingerwaard, Ravy biennale in Cameroon, Free Dimensional, Schloss Solitude guest artist from Mexico, CCA Lagos and Stichting WHAA. ند 3 افغانستان – Afghanistan 3rd Trend, Benedictine de Mambre and Yango biennale just to mention a few. She also runs an outreach program, the Arts and Young People program that gives young people a voice by using the arts. Besides her foundation’s growing collection of contemporary art – in preparation for her biggest project (the building of a museum of contemporary art focused on the international diaspora), S’thabile developed a Knowledge base & Library with 10.000 books, focused on research and archiving of Contemporary Art and artists from Africa and the international diaspora. She is also launching in December 2015, the Thamgidi Foundation magazine.